might be able to take care of you at the meeting.

this is EXACTLY what i use, wired to a maxi jet 1200 i had laying around 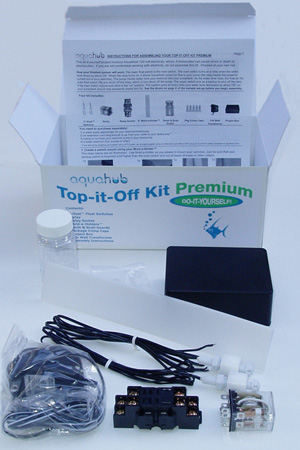 Everything you need to build a great DIY auto top-off system for your aquarium (and works for other water top-up applications too). Use to replace evaporated water from your sump or tank No more lugging buckets or spilling water Helps maintain stable...

i could even help you do it if you like. that kit, a pump, reservoir, and a hose. it uses double float switches, a high and a low, so if the low sticks the water rises and floats the second one which turns off the pump just in case.

John - i would hold off on buying any DIY kit at the moment if you can. we should have a MUCH better alternative available by the April meeting.

[quote=“logans_daddy, post:4, topic:2795”]
John - i would hold off on buying any DIY kit at the moment if you can. we should have a MUCH better alternative available by the April meeting.[/quote]

how effective is tapping a 1-5 gallon bucket and attaching tubing to a kent marine float??

im looking for something cheap to do on my 3 gal. nano

i saw something like this online but i cant find the link.

Depending on what your definition of cheap is you too might want to wait until the April meeting! ;D

as long as i can spend less than i would on a retail model, im sold, ha…im a function person, so u could make one out of cardboard as long as it worked and id be pleased.

less than i would on a retail model

think half of that

so u could make one out of cardboard

Okay i will wait i guess lol…

L-D knows how to make all the good stuff!

anyone ever put a small pump (like an aqua lifter) on a timer, and let the timer run for only one minute per day…

i can think of a million ways one could get in trouble with this…but i was j/w if anyone in the club has attempted this setup?

Our friend Marty just uses a syphon drip from a water jug to continously drip RO into the sump. about a drop or two a second keeps his level for a couple days. then refill the jug. just an airline tube with a micro valve to control the drip rate. match your evap rate.

Me, i just dump a bucket full in daily. along with my alk/kalk .

This sounds absolutely crazy to me. Can be more touchy and complicated then just topping off by hand. Just my opinion.

Shawn I need a cheap option for ATO as well. Also thinking about doing a little Kalk dosing. Can your secret help me to?

This sounds absolutely crazy to me. Can be more touchy and complicated then just topping off by hand.

Can your secret help me to?

I googled DIY ATO one day…and thats one that came up…trust me I know its a horrible idea.