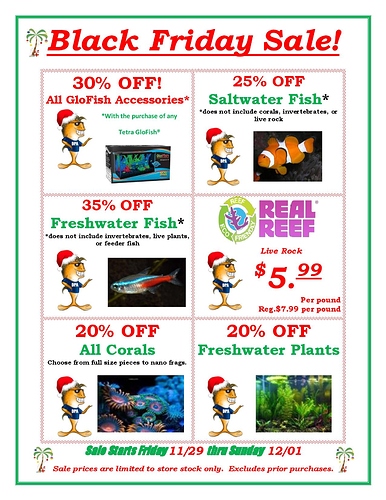 A whole bunch of new corals came in today, Look great! Lots to choose from.

Last day to come & get the big sale deals. Don’t miss out on that new fish or coral!

Can you get me a price on a mated pair of harliquin shrimp?

you are gonna need ssome sserious sstarfishess to feed a pair of harlequin shrimp for any length of time!

Harlequin shrimp are on the list from Exotic Reef Imports for $35.00 each but no mention of mated pairs. I will call my rep. Tomorrow to see if they can give me an idea on price.

[quote=“moliken, post:5, topic:6896”]
you are gonna need ssome sserious sstarfishess to feed a pair of harlequin shrimp for any length of time![/quote]

+1 also, nice avatar by the way. Too bad the pic is too small. LOL

That’s why I want a pair! Gotta keep star fish off my sps

Hey Jason are you referring to those little white stars?

Not just those but the mini brittle stars too,they are all over my sps

my tank is overrun with those little white stars. They just keep multiplying

I didnt think they were bad but when I look at my tank they are all over the glass! I am thinking about sucking them out of there tomorrow when I do my water change.

They keep my tank super clean but they are too much

yeah they are too much especially when you look at the tank the glass is speckled with them. Time for some to go! maybe I will get a harlequin shrimp.

I had an issue with strafish, mostly astrea stars on corals. I thought they were eating them. As it turned out they were hyper attreacted to the smallest bit of necrosis and accelerated the necrosis, attracting more starfish. It was an exponential problem. Once anything that was stung or had STN was remedied they stopped. BUT some are attracted to fresh cut frags in my tank. I killed them. Hasn’t been a problem for a few months. A few harlequins will wipe out all of em though. Just be ready to ask people for more when their all gone.

The availibility list comes tomorrow, will see then. Fingers crossed!

I have ordered a pair of these shrimp from Live Aquaria before and they were a mated pair. Had no problems with them, except when they run out of starfish to eat they starve to death. Here is a link to their shrimp page…http://www.liveaquaria.com/product/prod_display.cfm?c=497+525+749&pcatid=749

I would be happy with 1,doesn’t have to be a pair