Can you help identify this critter?

There is a creature that i believe is attacking my devils hand. It sort of looks sort of like a tube worm in color (white/clear) length and movement. It does not have a calcerous tube to speak of. it has many very short “tentacles” on it more at the “head” end. It is about 2 inches fully extended and 1/2 inch when retracting. It touches the coral in a few places with the tip or “head” and then retracts. The coral was VERY deflated today and has a couple of whitish spots on a few tips of it. A few days ago it had slime all over it but that went away and was fine looking yesterday. the white spots started about 5 or 6 days ago and either no change or worse since then. What is this thing and should I be worried? :

: It is way too small to get a picture of it with any camera I have so sorry I cant make it easy.

Does this thing move around or is it in just one spot and thats it? The slime part is normal. Some leathers slime (not sure if all do) to get rid of the algae that might build up on it and other reasons but is completely normal. What kind of white spots. If you could get a picture of it that would be the most help and if you have something you believe is attacking it use a turkey baster and suck it out if possible. Almost sounds like a spaghetti worm if there is no tube.

I can think of 101 things it could possibly be, but I think there is a good chance it isn’t harming the coral. Few things we run into will eat leather corals. Browse through these pages and see if you find something similar: http://www.melevsreef.com/id/

I’ve sen white spots occur on unhealthy leathers. Backing up, before examining the creature we can’t see and don’t have a lot of info on, what is your water chemistry like? Do you top off the aquarium only every couple of weeks? How long have you had the devils hand? Do you tell your significant other you have a devils hand and that is what is forcing you to spend all this money on a reef aquarium.

jk on the last one.

Will have to see if I can get a picture. The problem is its sooo small, I’m not sure if I have a camera that will pick it up. I checked that link and if I had to guess from the pictures on there I would say that it looks a lot like Digitate hydroid. If that’s the case, the web site didn’t post much information about it and only said that it was reef safe-ISH.

Hydroids can be trouble sometimes and other times don’t become an issue. If your camera won’t focus or you don’t think it shows it will perhaps try a video. My stupid point and shoot camera doesn’t have a manual focus so at times I’ll take a video and move the camera around until I can see the animal for a second. This will also help us get a bit of scale and possibly see movement from the animal/critter/mystery thing.

Today I will try to use a few cameras and cell phone to shoot pics and video. The devils hand had polyps extended for a couple hours while shrunken, then nothing for a day and its still really shrivled. Will re-post a follow up.

Mine seems to shed ever abcdy two weeks or so. Tthen perks right back up. Mine has done tthis :forabout two years

So here is a pic of when I first noticed the white spots on the tips, it didn’t look like growth to me.
The next picture is when it had shriveled up. It will stand back up at times when I feed corals but will no longer extend polyps. I tried to move it in case some thing was stinging it but did not help at all. I havent seen the critter for a few days at least. What can I do to help bring this guy back? PH 8.3 calcium 420 nitrate 5.0 phosphate 0.25 dkh 11 salinity 1.025 temp 80-82 :-? 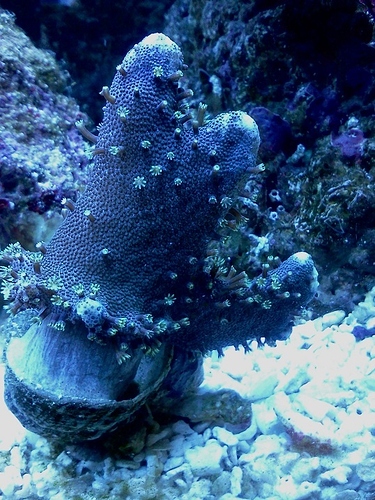 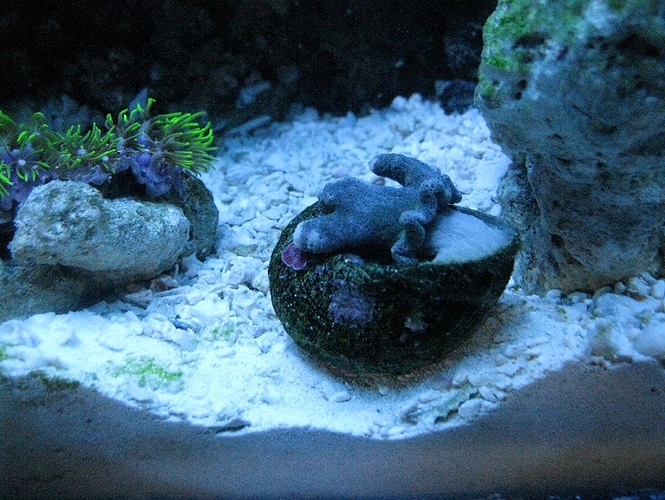 If the coral was freshly glued to that shell before you got it the water inside the shell could have become 100% stagnant and could have caused the coral to rot at the base.

A couple of notes/thoughts. Is your pH being measured with a calibrated pH probe. It likely isn’t 8.3 in the winter, but even if it wasn’t I wouldn’t stress over it. If you have a pH test kit that uses chemicals, don’t buy another. It isn’t helping you.

A little more light and flow may help if you can attached the shell somewhere that it will get that. Not too much of either at a time. It is 100% possible for it to come back and I wouldn’t ever give up on it. Corals can often come back from seemingly nothing.

Your refractometer is calibrated?

Yes I use a calibrated refractometer with auto temp compensation and the pinpoint ph meter is between 8.02 and 8.15 depending on time of day. Should i try to raise this? salinity is about 1.024 on refractometer.

[quote=“Gordonious, post:10, topic:5113”]
If the coral was freshly glued to that shell before you got it the water inside the shell could have become 100% stagnant and could have caused the coral to rot at the base. [/quote]

This was not glued at all. when it came off the parent colony I would put pieces in shells so they were not always resting on the sand bed. It was healthy when it was in my tanks. That piece I think was in the shell for 2-4 months if I remember right before he bought it.

That is odd about all the white none of my leathers look like that. The only time I have seen where it does not want to perk up is when it does not get enough light like when I had my bigger frag rack in the tank and it blocked almost all light from my colony.

Is the devils hand getting proper lighting? Another thing I noticed is your DKH is higher then in my systems. How did you acclimate it to the tank? The tank it came out of had 0-nitrate, 0-phostphate, 440-460-calcium, 7-8-dkh and salinity at 1.025 on my refractometer. I do not have a Ph test kit so I am not sure what it is on that. My main tank the mother came out all readings are the same except nitrates are 10-20ppm. Lighting wise my leather do good under both metal halides and just t5’s.

Scottman is it still hanging in there? Does it receive just as much flow at night as it does during the day? (Many people on forums seem to think the ocean goes stagnant at night time with the flip of a switch)

I wouldn’t recommend driving yourself nuts over your pH and especially wouldn’t try raising it significantly with chemicals. You could try opening up your house for a little bit or just the room it is in to allow CO2 to vent. A “CO2 scrubber” can at times also help. You could also consider changing your dosing methods and adding a Kalkwasser doser to help keep the pH a little higher. These are things you could do, but don’t have to at all and I wouldn’t suspect it was the issue or would dramatically help your tank. I have seen plenty of tanks with pH = to yours thrive.

If you haven’t already certainly try to adjust to more flow and more light at this point.

Best of luck with it.

I have a co2 scrubber hooked up to my skimmer on the main tank. Don’t know if it really makes a difference but I have been using it since the main tank has been up and before on the small tank. Which reminds me I think its time to replace the scrubber balls.

In the typical house they get exhausted very quickly. Your’s probably is not helping at this point. I have heard people claim they were getting used up with in a week or two. I typically try to change mine and my clients every 4-5 weeks, but don’t panic if it takes longer.

[quote=“JustSumGuy, post:14, topic:5113”]
I have a co2 scrubber hooked up to my skimmer on the main tank. Don’t know if it really makes a difference but I have been using it since the main tank has been up and before on the small tank. Which reminds me I think its time to replace the scrubber balls.[/quote]

jeff, do you have a ph meter? did you check before/after with the scrubber? I’m curious how good it really works?
thanks

[quote=“Gordonious, post:15, topic:5113”]
In the typical house they get exhausted very quickly. Your’s probably is not helping at this point. I have heard people claim they were getting used up with in a week or two. I typically try to change mine and my clients every 4-5 weeks, but don’t panic if it takes longer. [/quote]

I fill the whole container and it usually takes a few months or better before they go from white to purple.

I don’t think it was an issue with the acclimation as the coral was fine for at least a month or more before this happened. So I have tried to move it a couple of places with varying water flow and its not doing much. How long should I leave it in one spot before trying some where else? 2 or 3 days? no the shell is not closed off so the water is not stagnant. It looks as if it wants to come back sometimes (stands back up & TINY polyps) but then drops back off the next day again. this is usually after feeding the corals. My calcium is lower than where it came from. (410-420 in mine) JustSumGuy I don’t blame you at all. I think I probably did something to it myself that it doesn’t like. verdict_in oooops So now I just want to figure out what it was and how to fix it and not do it again. I think I may move it up to the frag rack tomorrow so it gets more light and flow.