Thats would be a great thing. LOVE the snow.

And I’m off till Tuesday also. PBJ!

I am ready for spring.

yup, sounds like we might get 5-10 inches of snow through Monday. and the ground is cold, so it wont be melting off fast. time to dig out the old snow shovel. I like to wash and wax it. it makes the snow slide off it easier when i throw it.

I wished for snow… then I left town! Not sure we’ll be able to make it back into town now.

Couldn’t be happier to see that!!!

uhh, Is that a Diesel? 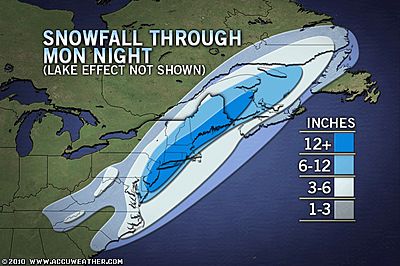 Couldn’t agree more, I’m ready to take my boat out and go crabbing!

Yet again the weatherman was wrong. Not that I blame him - they happen to be the only people in society we expect to be able to predict the future - but I could still see blades of grass sticking up through the snow this morning.

5-7" down here. more where the snow blew. very windy now–never as windy as Mr. Prez, though.

When I was little the had a 3 day forcast and it was accurate. When I was a teenager they had a 5 day extended forcast using doplar radar which was pretty accurate.

Snow drift is screwing with totals, my friends house has no snow in the back yard and a foot in the front yard.

like Craig, only about 3 inches here. grass poking through yet. not even enough to worry about shovelling. although, 2 different people knocked on the door offering to shovel the drive today for a whimpy burger on tues. but i think i’ll just let it melt. should be warm enough next few days to burn it off. no big deal.

Its going to get to almost 50 by the weekend! I had no snow on my driveway, but a 1.5ft drift at the end of it! I really wanted to test out my truck in the snow, bummer.