Let me try this again. For some reason while I was typing this post I lost every thing I typed. It said that I timed out and I just logged on. Not happy :~S :~S

My new Solana is coming along. I am now in the new tank syndrome stage with diatoms. This started after I added new lights, Nova Extreme Pro, 6-18 watt bulbs and R2 solution programed moon lights. I have tried some different snails to see which works best. I found the best one was Mexican Turbo, and of course I had only bought one. (not my favorite snail) Since then I have added two more. And they seem to be doing a good job on it.

My question is this, how many Mexican Turbos would you add to a 34 gallon tank? :TWOCENTS wanted.

Thank you for your advise,

I have always been of the opinion “The more the merrier”. Depends on what else you are goig to keep as part of a clean-up crew. The old rule of thumb (that I still follow) is 1 member for each gallon of water.

You are going to want a variety of snails as each will be responcible for a different piece of the clean-up process. So you’ll want to plan on a few more turbos, some nassarius, stomonella, and ceriths as well.

True but eventually they will run out of food and you may have to sell off the extra.
I say you are at your limit now for Mexican turbos since they eat a lot unless you pull them to the larger tank when food runs out

By the way here are a couple of pics of the new tank. 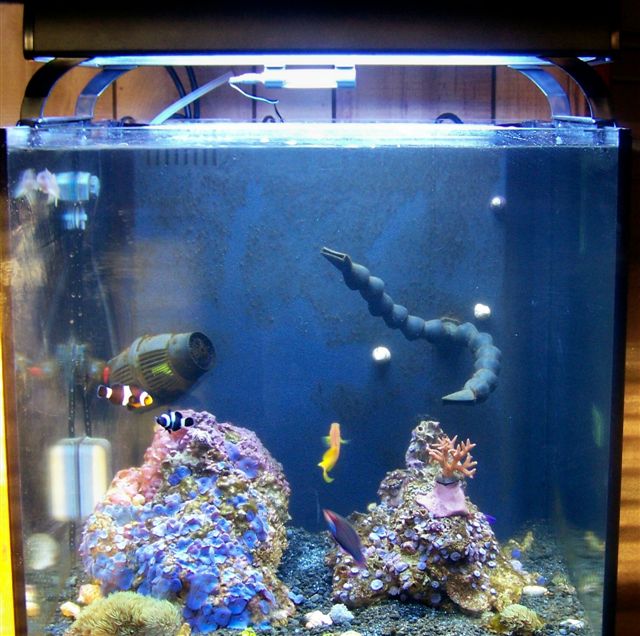 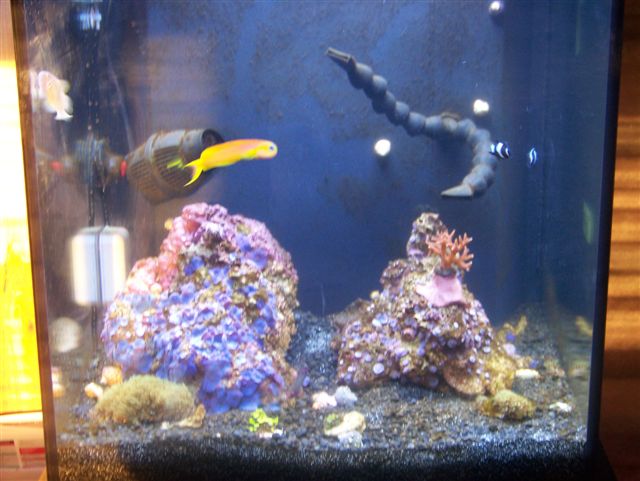 I’ve got 1 turbin, 2 turbos 2 chestnuts in my 55 and could stand to use another turbo. A few astera (sp is wrong) star and the regular, a few cerith, and lots of nass.
The nass do a great job of cleaning up extra food, but most don’t clean the glass, but some will, they also stir up the sand bed and are pretty cool little creatures and don’t seem to bother anything in the tank.
The cerith stick to cleaning the algae pretty well and stir the sand a bit.
The asterai stick to cleaning the algae, but can’t right themselves if they fall over.
The turbos do an awesome job of cleaning, but also knocking everything over, but only at night when you can’t catch them. Day time I’ve watched them clean algae off a frag plug without disturbing the frag in the least.
The turbin is pretty much the same as the turbo, but looks like a turbin.

thank you for the info.

I stopped at the shop and picked up four more turbos, red brittle star, and with Kens advice I got a queen conch.

Ken, thank you for all the reef bugs and all the little sea stars.

You are Welcome tom.

I brought the bug pack tonight hoping you would be at the store. I had been reading up on my Queen Conchs recently and found some good research that showed the Queen Conchs were much more omnivorous sand cleaners and were more fond of red slime, diatoms and cyano than others. Mine seem to do the job. I bought 2 of them a few years ago about 3/4 inch long. and now they are 3 1/2 inch long and roam the sand bed of my fuge like long neck sheep. Pretty cool.

I like your new tank. I see you have the new KUNG FU PHENG SHUAI Lock Line return lines!!
AYE-EEE-YAH!! WU! WU!! Or what ever Bruce Lee would say to the fishies~!~
Very Nice!!!

Hey Tom, good to see you posting again. Tank looks like it is coming along. Can’t wait to see how it looks in a couple of months when you get it a little more stocked with a couple cool corals.

I would actually suggest against queen conchs for most people. People complain about the size of large turbo snails knocking over corals. I can’t imagine what complaints we would here if they had a 16" conch in their tank. Queen conchs get way to big for 99% of reef tanks. You can also image how much food a 16" conch requires. Yes it takes a while, but I bought two really small ones a year ago that are already to the point where they are anoying in a tank with frags.

Some people have rough luck with certain critters and at some point just have to give up on keeping them. If something doesn’t work try again in a year and maybe you’ll have better luck.

You’ll get a feel for the tank and maybe if you need a lot now you could throw some in your larger tank when they are no longer needed for clean up.(or perhaps when they are hungry for more and your tank isn’t growing enough food)

PS. Give Rich a call about that friend of your’s.

BTW, when Tom asked me what I thought, I went over to the shelf at Premium and picked up this book by Julian Sprung:

Often times in the hobby it isn’t always that you need to know the answer to every question, but who to ask or where to find the information you need. This book goes into a lot more detail then Ian’s little synopsis above on what eats what.(not only that, but how to identify, which algae’s become real problems and which aren’t real problems, and a lot more information)