Why would anyone would want to sell these things.

because they are one of the most benificial worms you can have in a tank, the confusion is beteween these and “fire” worms which are known to eat some corals. fireworms are different by having a much wider area between the bristles and much more red. 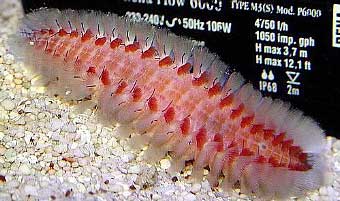 Dang!!!~~ Iv’e been tossing out a small fortune in 5 inch bristle worms lately from some fuges. How much for the Big-uns?

Actually, this place in Hawaii makes a business out of selling the whole kit of detrivores.

But like Mr. -X said, you can get most of these as hitch hikers on your live rock, and even coral frag rock.

why would you remove bristleworms from your refugium?

Well, i go in and thin out the prolifera now and then. it makes a tight matt on the top of the sand with interlocking stems and hold fasts. so i like to loosen them up and let the sand breath. the bigger bristle worms fill my hands with bristles, that actually do sting and take days to come out. sometimes my fingers look like they are growing fir. so when i find 5 or 6 inch long ones, they go. i find them under rock in the tanks too,. little ones are ok with me, but when they stick me, thats too big. better to have a bunch of smaller ones than just a few really big ones.

ahh…i never put my hand in the refugium without gloves. grab a box of those non-sterile surgical gloves. they are a godsend.

i’d even go as far as only sticking tweezers into it to grab things, and if your running a plenum sand bed, 6"+ i always heard you should never stir it.

I Never got used to wearing gloves. a good idea but a lot of plastic to toss out. I grin and bear it. im in and out of the tanks all day. But i got to remember to wash and rince my hands thoroughly. especially when i get a cold. like last night. I was rubbing my eyes , late last night and sneezing from a cold coming on. my right eye started feeling like i had some sand in it. more rubbing. woke up this morning with a burning, swollen red eye. I was picking some palys off the glass late last night. i may have left a little slime to dry up on my fingers. I bet that’s what got me. a little Paly juice. still burning and watering and red tonight, but back in focus. nasty stuff.

Makes me look like Rocky. Even when he won one! He still looked pretty bad.

i don’t use gloves often…just when i’m pulling macros out of the refugium. i don’t like that fiberglass in the fingers feeling.