Ok, big celebration for small victories. It’s been quite an odyssey so I’m feeling good and need to share: My tank is finally stabilized at .06 ppm for PO4, and 9 for Alk. It’s been a long and challenging journey mostly due to my own incompetence.

Last July I upgraded from a 90 to a 120. I love the 120. It feels like the perfect size for me, at least at this moment (lol!). At about the same time, I switched from a dosing set up to a calcium reactor. So, I thought I was golden: that the upgrade would have a minimal effect on my tank, that my mostly stable parameters would remain stable, and that it would be relatively easy to lock in my alk with the calc reactor. HAHAHAHAHAHAHA. Almost a year later, I finally achieved those goals (at least for the time being–fingers crossed).

Today was the 4th week in a row where I got an Alk reading of 9 and a PO4 of .06. My alk was never bad, it would just slowly gain or lose .01 per day with every minor adjustment. Frustrating. My PO4, on the other hand, was a nightmare. It spiked up over 1.2, I was dumb and got reckless with the GFO so it would swing up and down, blah blah blah.

Fingers crossed I can keep these parameters stable long term and start to see some serious growth in my corals. Also, maybe I can finally keep some acros successfully.

But also, thanks to everyone here, esp. Adam, Donovan, and Jeff, who offered such good advice along the way.

I use a dosing pump because even though I don’t have but 1 coral, I have a ton of coralline algae. I gave up trying to get it to stay at 8.3. my alk ranges from 8.5 to 8.1 from my week to week tests. Doesn’t seem to be bothering the stylophora which is starting to show signs of upward growth.

I use a dosing pump on my calcium reactor too. John Walker sold me his lightly used Kamoer, which is a pretty nifty little machine. It just took me a while to figure out how best to make adjustments which in this case involved a combination of minute flow and ph tweaks. For the last 6 months I’ve been in that zone you describe where it goes up .03 or .04 over the course of a week. I just wanted to get it to stay put or only vary by .01 in a given week, which (knock on wood) I think I have accomplished.

I did manage to salvage a few acros through my PO4 spikes, but the losses were pretty dramatic. I put some new varieties of Monti’s in a few weeks back and they look very happy. My WD is coming back nicely, and my other 3 acros look better than they have in a long time. \

So, a new beginning? Hehe. My experience has been that I can’t keep things happy for long but maybe this time I’m in a better place. I also think I simply underestimated how long it would take the 120 to settle in. I guess I had assumed that it wouldn’t take as long because I had moved my rocks, some sand, etc over from an established 90g tank.

Huzzah! Good on you Ed for keeping at it!

Heh, I definitely had thoughts of bailing. It can be soooo frustrating when you keep killing corals.

Stay strong friend . I also have been in a battle for over a year now with my tank. Big ups and big downs
Things that would make any one bail on the hobby. But I stick with it and know one day my reef will be how I dream it to be. Plus when you love the hobby , the fish, the beautiful corals you can never stop.

This photo is from coral mag like 2011 or something.
This guys tank is amazing and people told him he couldn’t keep corals like those in a small tank. But its beautiful and it works. 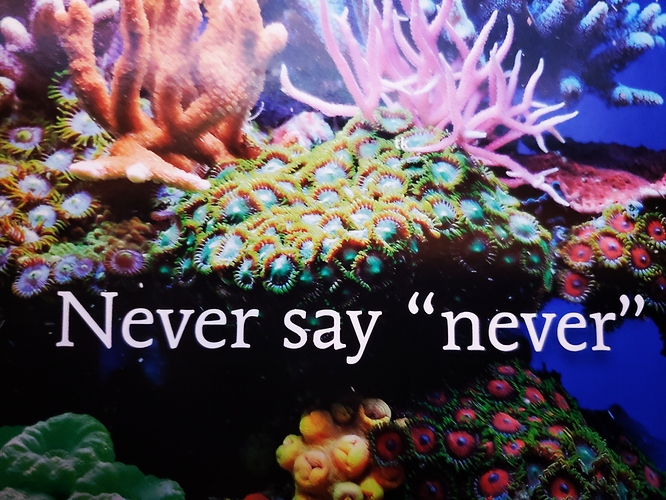