Updates on my tanks

On the biocube, things are progressing slowly with this tank. I have been battling turf/hair algae and I’m fairly certain it’s the rock that’s leaching phosphates (Caribsea life Rock shapes). I broke down and brought up the nano aquamaxx reactor and put 1/4c of GFO in it, removed a good portion of the algae, did a 10g water change, and took some peroxide to the exposed portion of rocks. That rock is clear and clean. I dose Vibrant twice a week, and once my Bacterclean gets here, will be using that instead (Vibrant almost gone). No corals as of yet in this tank and have a yellow watchman goby in QT from Vivid Aquariums downstairs in 2.6ppm Copper Power. Will move the fish into the display probably this weekend. It’s eating and looks really healthy. Unfortunately my cleaner shrimp didn’t make it and since I got it from Vivid it was hanging on the back wall, just really not as agressive as I have seen cleaner shrimp be when food is in the tank. Came down 2 days after the peroxide treatment and it was in the front corner dead. I don’t think it was related to the peroxide, but who knows. I also got 100g of Aquachar that I’ll be using next month when the chemi-pure elite is due to be removed from the tank. Curious about that stuff as it’s supposed to last 4-6 months from what Brian Covey told me.

I also added a blue tuxedo urchin to this tank and he’s a freakin lawn mower. Plenty of food for this guy.

For the 120 downstairs, it seems like the less I do, the better this tank does. The purple stylophora that was struggling in the holding tank, has spread out and is growing now. Bulletproof…it’s the only coral I had that survived the holding tank and confirmed one thing for me…I don’t have the means or the ability to set up a coral quarantine tank. In that holding tank, the dkh fell to 5.7, nitrates well over 100, calcium hovered about 300…not to mention my light is good for a fish holding/QT but not corals.

Back to the 120, the algae that was over the rocks is gone, literally, like overnight it disappeared. I have coralline algae growing out the wazzoo, as the floor is for all intents and purposes covered in coralline algae, both pink and purple. The Rainbow Bubble Tip that I got from someone here is doing well and has split about 3 times, 2 of which are now in the biocube. All fish are doing well, and even the hippo tang which got trapped under a rock and had 2 big wounds has made a full recovery (after a 2 week stint in a hospital tank). The Yellow tang, which is a massive prick has settled down, though he still hates the Tomini Tang for some reason, but it’s not as severe since I have moved to an alternating feed/nori day. For example, on monday, I’ll feed LRS about the size of a nickel, and the next will get a big piece of raw, unsalted sushi sheets in the algae grazers on each side of the tank. This has appeared to really settle the aggression down between the tangs…The clownfish, that I also got a few years ago from someone here lay eggs about once a week it seems, so I’m taking that as a good sign. The Midas Blenny is probably my favorite fish, just chalk full of personalty and has his own little hole in a rock. You can walk up to the tank and see him popping his head out with his horns over his eyes looking for food. He’s not afraid to mix it up with the bigger tangs for food. In this tank, the only place that I have algae is in my overflow box (a 60" glass coast to coast) that i toothbrush off every other week, almost like an algae scrubber, it goes into the socks and a day later, I swap out the socks.

This tank, however is still up for sale. It’s a steal for what you get with it (all rock, sump, equipment) and will basically fund my next thing, which is tear down of the biocube and put a 40 breeder in place of it using my life rock shapes as one piece of the aquascape, and a big piece of Pukani as a stand alone island, lit by 2 Hydra 26 HD’s…maybe I could get away with a single Hydra26 on that tank, but I think 2 would be better. The 40 breeder would be drilled for an exotic marine 20" overflow (picture synergy, but quieter) down into a 20 long sump. I would prefer to buy a 40 breeder stand, but if I have to make one, I will. But that’s all future plans if/when I sell the 120 gallon (not your standard 120 either, 60" long).

Thanks for coming back with an update! Great to hear you are still in the hobby and pushing forward.

Algae issues are seriously awful. I’m battling the beasts myself right now too.

No pics, I’m a money laundering investigator not a photographer lol and that’s quite obvious.

I’m actually not all that concerned about the algae, in the grand scheme of thinks the tank is only coming up on 8 months past initial cycle. As for the 120, this is the first real time in 4 years that I’ve had this much coralline growing. And there’s no pesky vermetid snails in there this time that will annoy me. I am actually toying with taking out some of the rock though to create more water flow and a more open aquascape, but with the tank being 18" wide, even the best people at aquascaping would have issues getting this tank to look natural that doesn’t look like rock piles.

The 18” depth is tough for sure. It really only gives you about 6-8” of usable width if you want flow all around the structure. 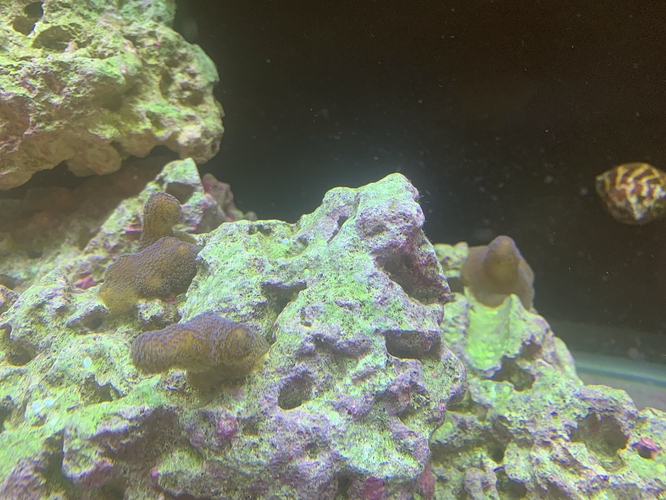 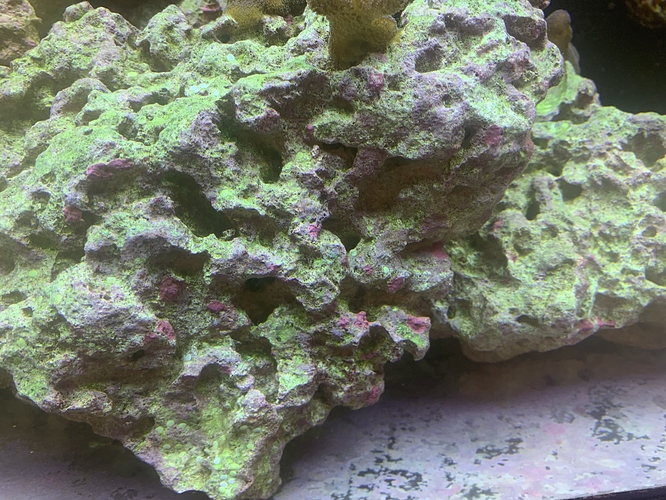 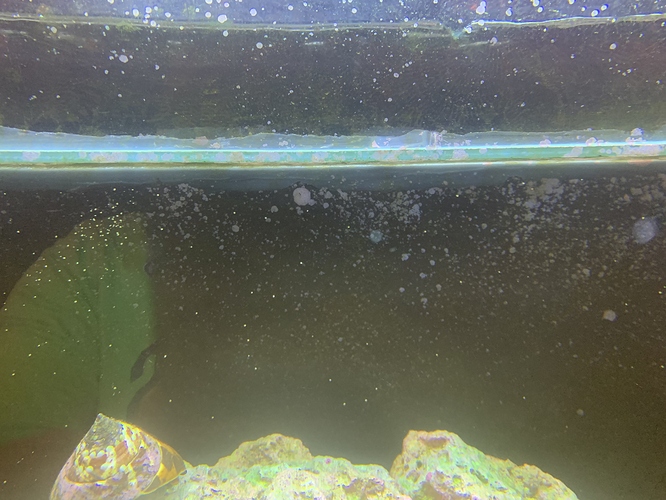 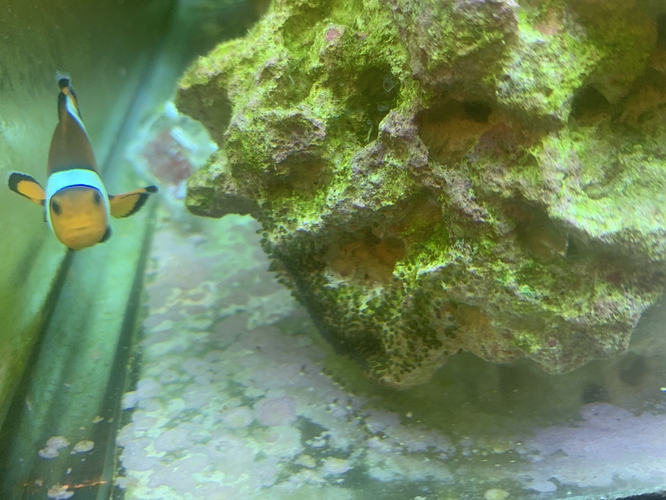 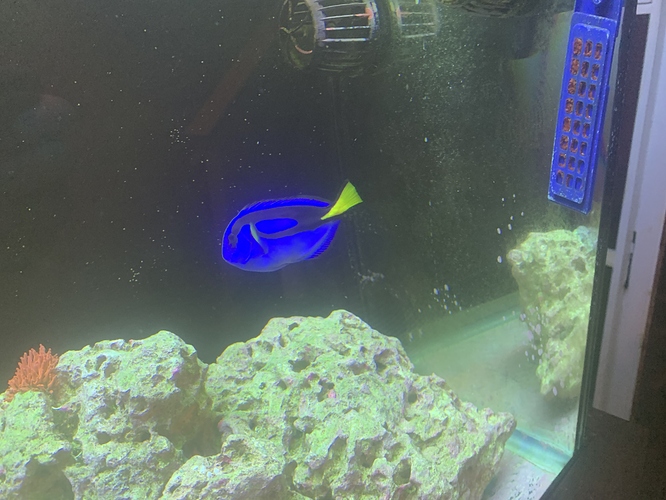 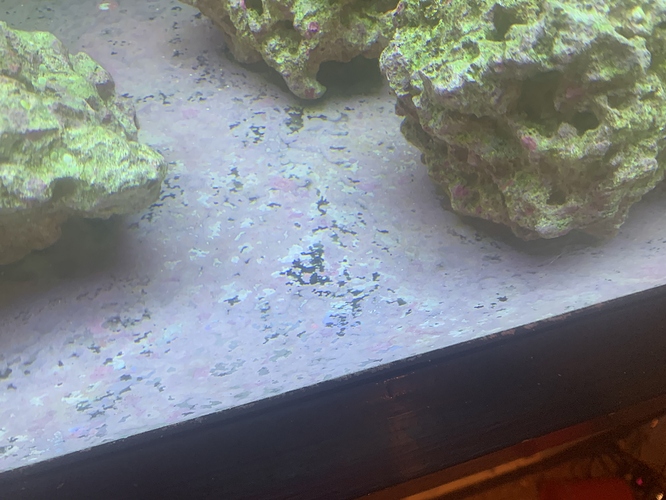 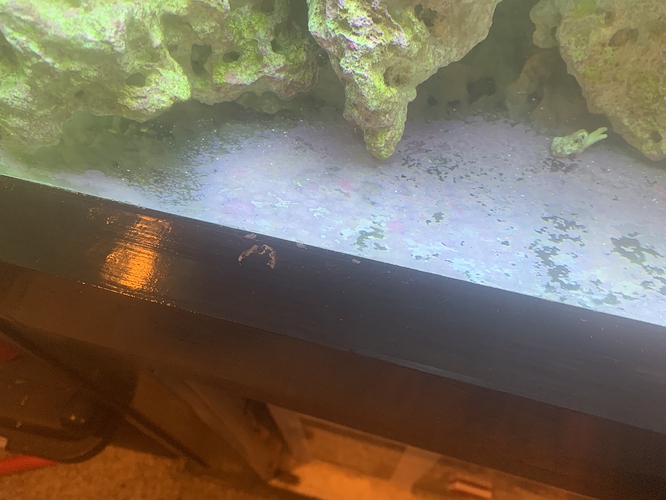 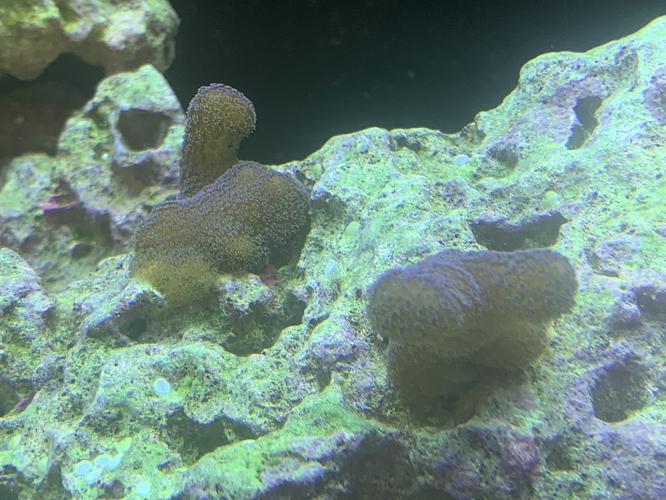 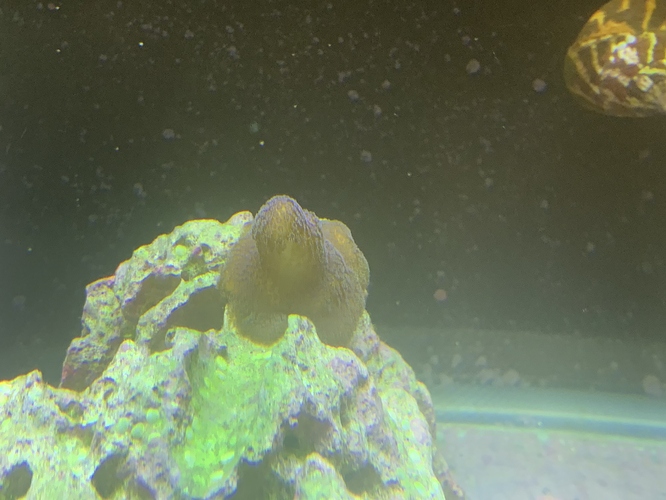 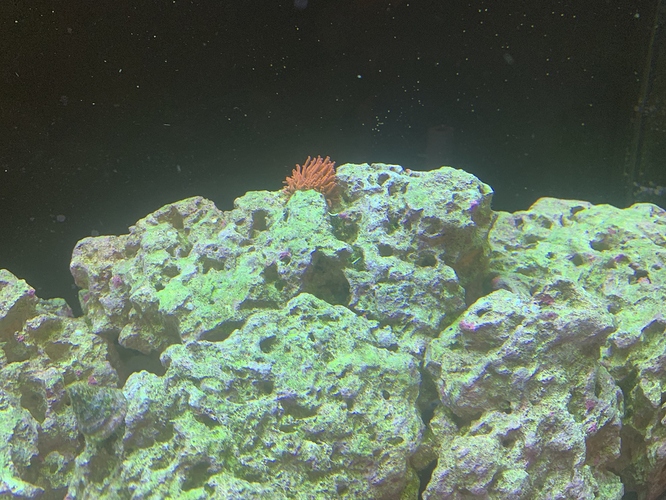 It looks like it’s doing great. I can probably add corals but every time I do…they die. 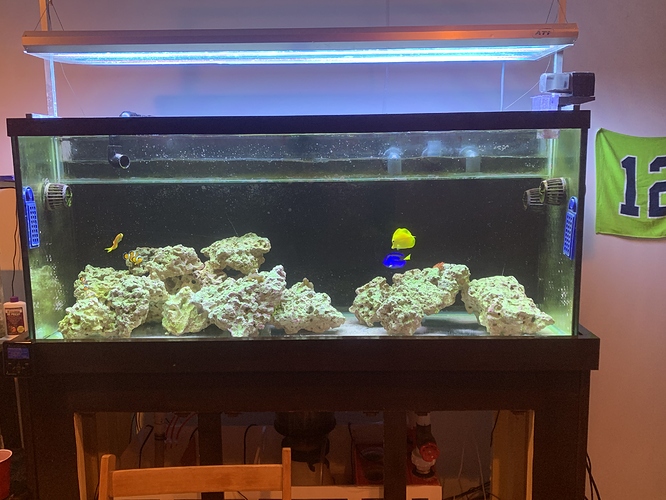 The yellow watchman goby in QT 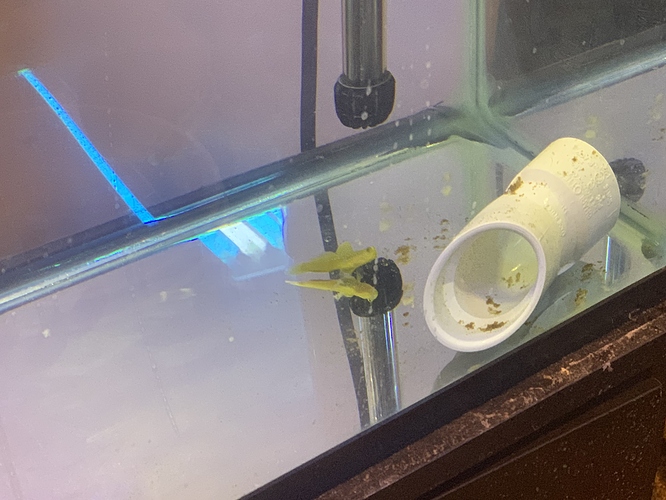 I have about 40-50 lb of pukani that I am just starting to cure for no particular reason. Maybe a new build if I sell the 120…who knows. Will probably get a damsel in there in a few weeks. Took 2 pieces of rock from the 120 to start the seeding process. 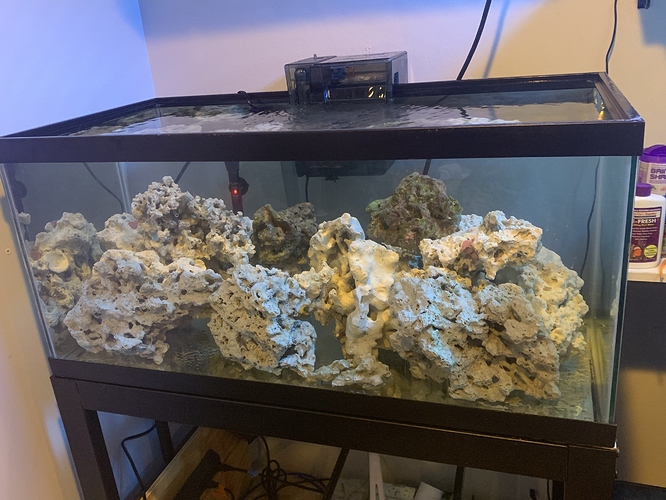 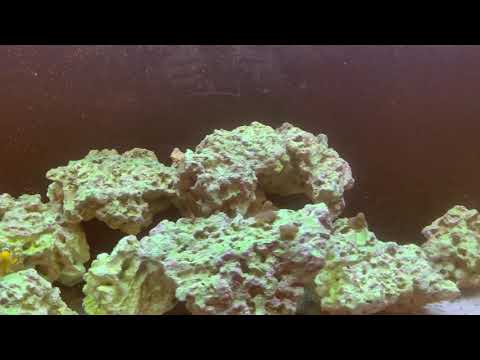 Looks nice - thanks for posting. I like the simplicity. What’s in the sump? =)

This is a structure I have been working on for the biocube. I got over hangs, caves, I have a canyon swim through and only 2 parts of contact in the sand.

I think my life rock is leaching and I think in 4-6 months when this is cycled, I will replace the life rock with this Marco rock structure 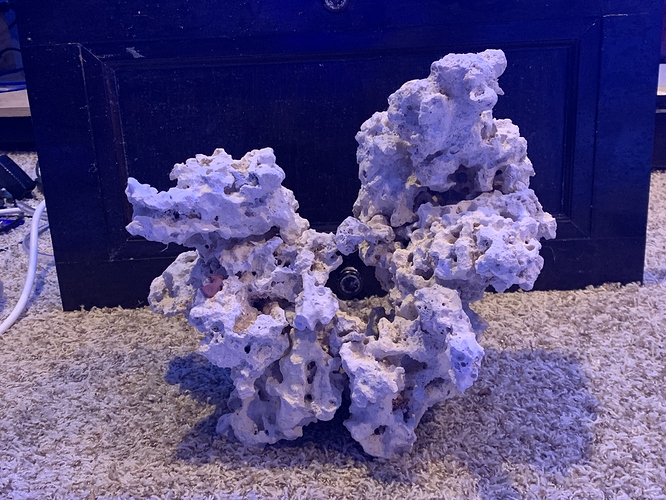 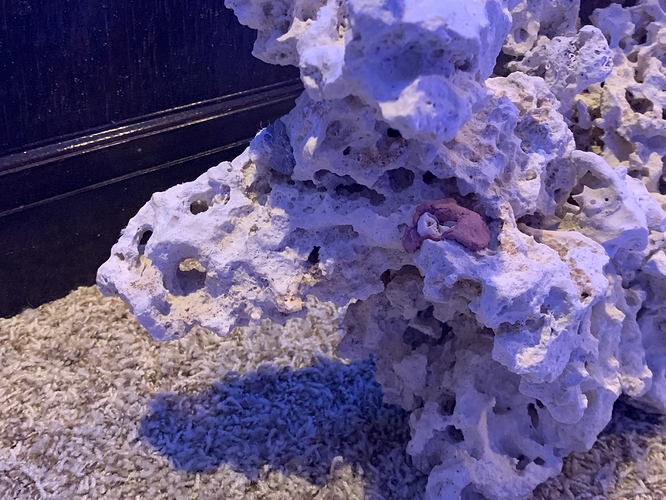 It’s a little different when I measure the one side was too tall.

Once I get more gorilla glue, I will fix that. I like the new design equally as well

I like it! Looks like it has good places to put corals at different heights with some space to grow.

there is. my only concern is the gorilla glue breaking down and the structure falling apart.

If it is just gorilla glue branded super glue, you’ll be fine.

gorilla glue gel is good with doing rocks I imagine it would hold up better then it does for frags. I have had a lot of frags that if the disc does not get encrusted sometimes the frag will pop right off the plug but the glue always holds great on the plug. I also use a accelerator when gluing my sps so that could play a role as well.

i really like how this turned out. if I had to guess it’s between 20-25 lbs. it’s about 14" across and 11" high. Perfect for the Biocube. Will start the cycling process in a 20 long for a few months and move it into the biocube and replace the life rock.

IN the meantime, I have dosed this tank with Reef Flux Rx and while the rocks look cleaner, there’s still a lot of algae in there. I’m thinking that I’ll have to do a second treatment, but it’s only been a week. I do know the liferock is leaching phosphates as in fresh saltwater it’s reading almost 0.07. Not a ton, but combined with the TDS of 16 or so that was coming out of the RODI system probably is the main result of the algae growing on these rocks.

I am still thinking about selling the 120, all the livestock, equipment and rocks, it’s a plug n play system for anyone looking to set up a saltwater tank without the aging process. So if you know anyone who’s looking, let me know. That would give me the excuse to set up the 40 breeder in our family room and become the main display in place of the biocube. 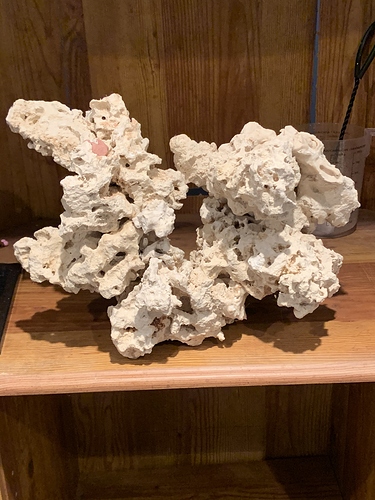 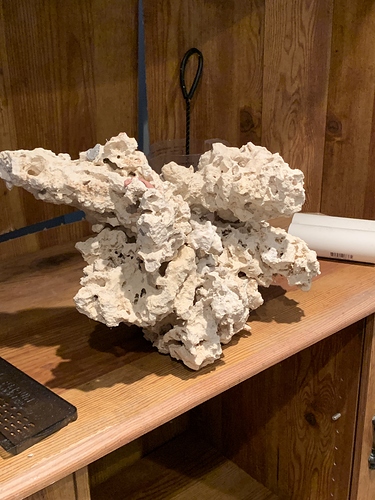 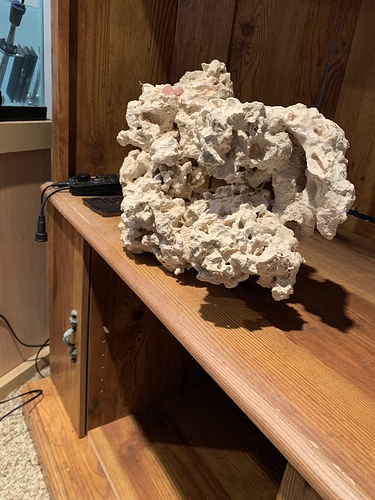 That looks great! It will look great in the tank!

You’re getting 16 TDS on the output of your RODI? What’s the incoming TDS?

i was. my final stage of DI resin was exhausted and I didn’t know it. I have since changed out the 3 resins, and the TDS has dropped to 0.

I’m looking forward to that and getting rid of the life rock. It’s not as porous as this marco rock, not saying it’s bad, and I have 6-7 marinepure bio-balls in the back chamber of the biocube. I just threw in the biospira, some ammonia, and we’ll start this process and let it run for 4-6 months, just dosing ammonia once or twice a week once it falls to zero.