As I said in the meeting I’ve got this 75 from Al, that I’ve got about cleaned up and just need to get plumbed. My thoughts were the 75 into my current 55 then into a 50 gallon sump (tub). I’d like the current 55 to still be visible (or slightly so) and act as somewhat of a refugium. The tub will house just live rock with a closed top to minimize evaporation, it’s purpose is to simply add extra filtration and extra water volume.

How do you plan on plumbing everythingtogether? As we discussed briefly in the meeting, many 55g tanks are completely tempered and can not be drilled. Would you have room to drain the 75 in to the tub, have it gravity feed in to the 55 and pump back up to the 75 DT?

That would be the way to do it if possible. I have always wanted to have a display fuge that was visible through a cut out frame in the custom stand.

If you wanted some cool things to try in there I was driving around to some LFS and a certain shop had some really nice items for fuges, Just Fish. If I remember correctly they had mangrove pods, Shaving brush plants, and mermaid’s fans. I would qt these items for a while though to make sure you don’t get any pest species in you’re aquarium like aptasia anemones or hair algae.(we had a debate on qt a while ago, I think Shawn would just throw these right in his display tank) Anyways I was excited to see these items there as most LFS typically don’t carry them.

Sweet, good to know some LFSs have some cool stuff. Not sure on everything I want in there yet. I think PetKare usually has some mangrove pods for cheap as well.

I would avoid putting on a HOB overflow from one into the other under the stand. What are you going to try to fit into the sump that you couldnt put in the 55? I know you mentioned you want to do a display fuge, but you can do that in the middle 1/2 of the 55 and use the two side 1/4’s as a sump.

50 gallons of water lol. Really the main reason is I just want that extra 50 gallon buffer in there.

You indicated you wanted to keep extra LR in the tub, remember that evaporation is going to occur from whichever container holds your return pump. So if your return pump is in the tub with the LR you may end up with some of the rock being left out of water - causing die-off. When you then top-off the tank all of the dieoff on the rock that was exposed to the air will pollute the water and cause amonia spikes, thus negating the effects of a sump/fuge altogether.

A 55 would provide ample room to have both a nice sixed sump and return area, as well as leaving the middle as a fuge. just requires making baffles, which are very easy to do. drain the 75 to the right side of the 55 where you keep extra LR, it then flows through the fuge in the middle, in to the eturn section on the far left. you could feasibly have a 1 ft sump section, a 2 ft fuge, and a 1ft return section. All estimates of course as the baffles will take up a few inches of space.

If you need help with the baffles just ask I’d be happy to lend a hand.

I would divide the 55g up in thirds like stated, first section for skimmer, second for fuge and extra LR, third for return. This is how I have done all my tanks and it has worked out great.

Craig, why is that? I’m trying to work it out in my head. I agree my wet/dry sump is always what loses water, but I’m trying to wrap my head around why. Maybe its too early and I had too much scotch last night.

Wouldn’t I run into the same issue with the 55? Except I’ll have less of a horizontal section to lay out my rock, forcing me to stay them higher and they would be more likely to be exposed?

Its not what loses water. You have evaporation everywhere air and water meet. The difference is the display tanks water level needs to raise to a specific height before water is dumped to the sump. If the water evaporates in the DT the sump return pump pushes water to the display till it raises high enough to reach the overflow.

With the 55 divided up - lets say chamber 1 is full of LR (btw I suggest small pieces here), chamber 2 is the fuge, chamber 3 is the return. The water level in the 1st 2 chambers can never fall below the baffle height, because as long as there is water in chamber 3 water will be flowing (via the DT) in to the 1st 2 chambers.

If the water falls below the baffle height it just stops flowing - eventually i will evaporate, but by the time that happens you have MUCH bigger problems to worry about -specifically it means your return pump has run dry and probably burned out.

Chamber 3 is the only section that has water mechanically removed, the rest DT, 1st and 2nd chambers are all drained via gravity, which is why the return section shows the evaporation.

Don’t forget a chamber for the skimmer! I’d put liverock and the fuge together in the same chamber. I’d suggest an ATO. In my sump (50g) on my 120g, I lose about 10 or so gallons a week! It’s insane! I am considering getting acrylic sheets to go over my tank and sump, but you still need proper gas exchange. Also you will build condensation up on the covers and I don’t want it to block any light to my corals.

Starting to build the hood for the tank. Using pine planks, brass hinges, and wood glue. There will be a base for the hood and then the hood itself which will have the lights bolted onto it. Looking down on the top of the hood there are three sections. These are made up of a top/front/side section (front), top/middle/side section (middle), and a top/back/side section (back), I’ve grouped them like this because that is how they are connected. The “front” section is hinged to the middle section as well as is the back section. The middle section acts as the base support for the entire hood. This setup allows you to open the front for feeding/maintenance and accessing the front 2 bulbs. Opening the back allows access to the back two bulbs and the skimmer area. You have to remove the hood to access the middle bulbs.

I tried to make that as detailed as I could without pictures, I’m sure its totally confusing. I’m making a model of it in SketchUp and I’ll post the model when I’m done.

Lights are T5 lights 4 bulb right now until I order another set of end caps/standoffs and bulbs. Plus they are currently setup for the 55 so I don’t want to take them off of that until that is ready to be a sump for the 75.

a little natural cooling tip for hood building. I build mine with an open back, but also make them a bit longer and wider than the tank. so that when it sits on the tank, there is 1/2 inch air space between the tank frame side, and the inside of the hood. this allows air to freely flow up and into the hood from the front and side edges of the tank and flow out the top back by natural convection. chimney effect. then you dont need fans and the tank doesn’t overheat. I add lttle tabs of wood tacked to the inside of the hood as spacers to keep it centered and the air gap open.

I’m going to put in 2 80mm fans (air in, air out), so hopefully I don’t have a cooling issue, but it is better (and more efficient) to simply design the hood so heat escapes naturally. My T5s don’t seem to generate too much heat in the current setup (ghetto rigged) but I’ll see how they do in the “nice” hood.

Decided to notch out the stand legs to give room for the 55 instead of moving the legs to the outside.

Still not sure on the height for the stand, Al had it setup for 6’+ tall people. I am not one of those people.

It was set up for tall people who have a bar 41" to the tank bottom. The bar is 41.5" high had to keep it the same height. I hate bending

Attached pic of all the wood for the hood and a pic of the progress (bottom brace glued together, glueing middle support) 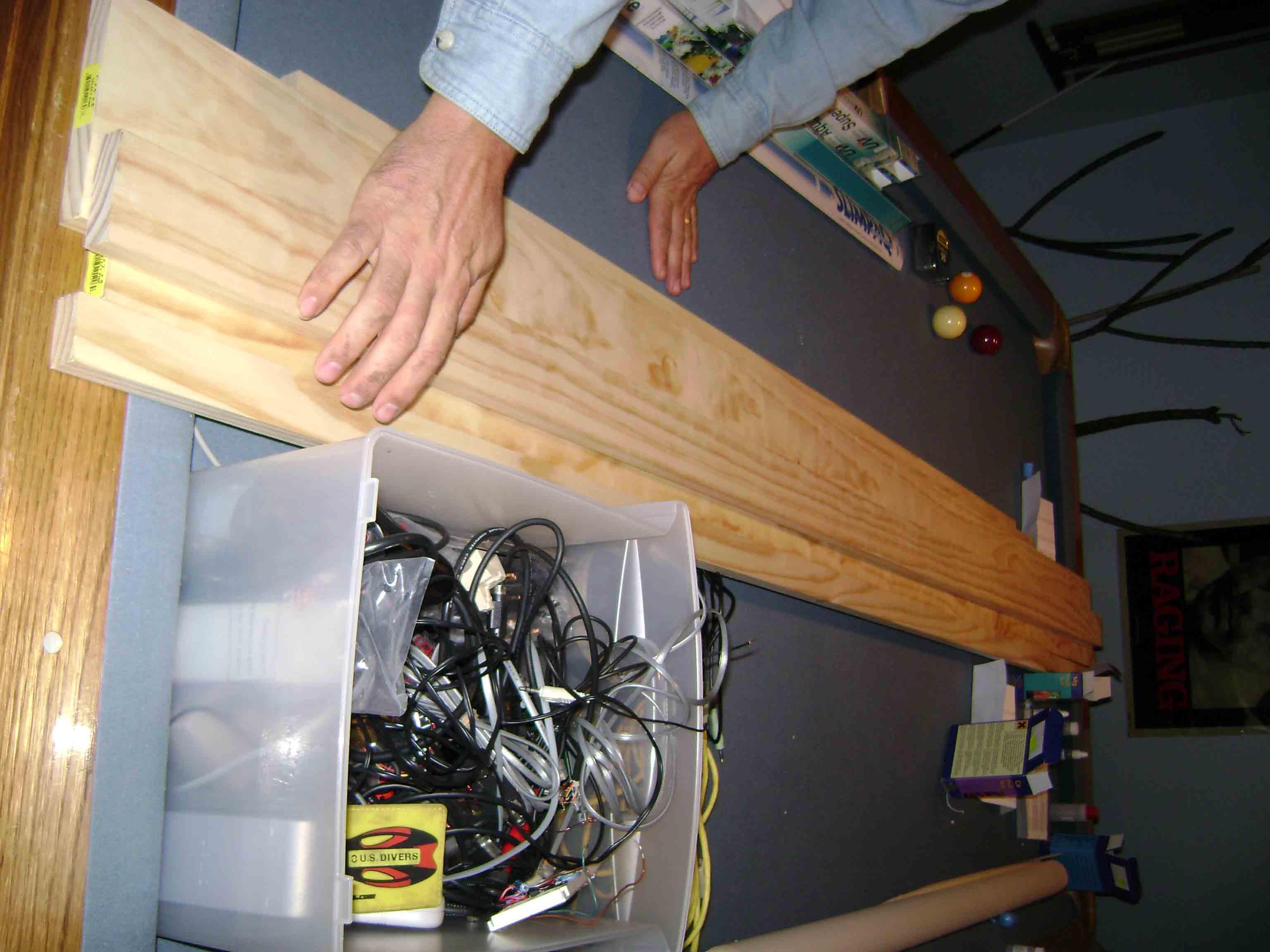 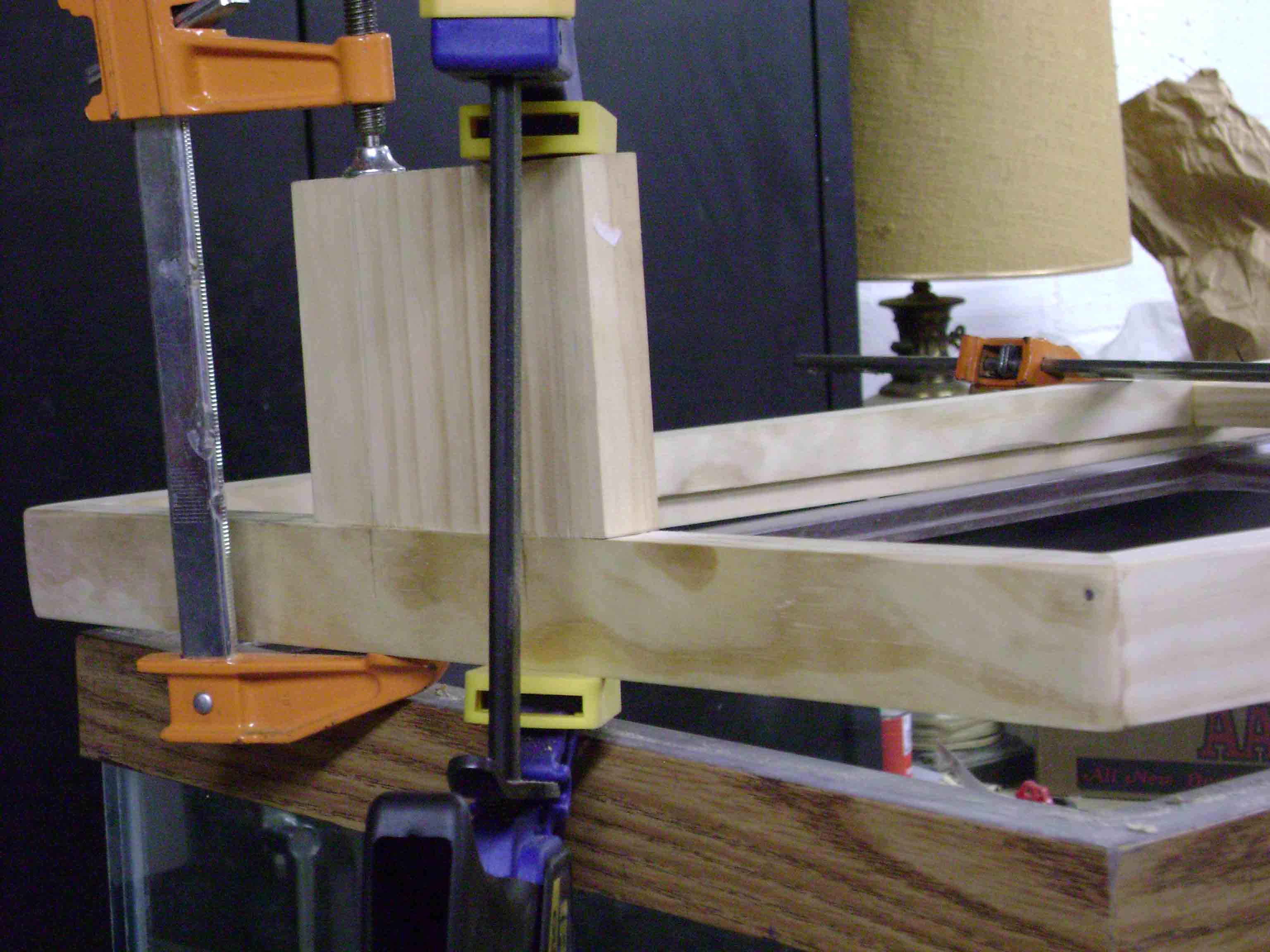 Rockscape…Not sure how I’m going to manage this. Who uses glue/epoxy? Who doesn’t (stack 'em and hope they don’t fall)?

Bottom…not sure either! The 55 already has a DSB and I want to keep that in there. Not sure what I want to do for the 75…BB, SSB, The epoxy with sand on top idea…