Here is the link to our trip album! We’ll update is as we go.

Today we went to Punta Allen via a long dirt road! The picture with the birds is from a natural waterpark, Xel-Ha. Good times so far our current hotel even has a bathroom and electricity for the next few hours!

I’m not goin’ anywhere I have to sleep in a net!!

So when is the first dive?

10 bux says if I said you could your ass would be down here in that net in about 5 seconds!

PS I like who ever changed my avatar and caption …

10 bux says if I said you could your ass would be down here in that net in about 5 seconds![/quote]

Yoh! Swab!! Who’s the Geek next to the Babe?

I’m just glad yous guys had a good time down there.

Vacations are a great idea. we should all take more of them.

Yoh Swab! You know we are all just kidding yous guys because we’re all envious! how was the diving?

Sadly no, no diving pics.

There were gorgeous anemones that were loaded with sexy dancing shrimp. Awesome little clear blue shrimp, tons of coral banded shrimp. The place was LOADED with all sizes and shades of purple tangs and tons of other tangs. We played with some Sargent Majors, putting things onto their egg patchs and watching them get mad and shove them off. Saw an Eagle Ray. Several snowflake morays and a huge green moray. Tons of gorgonians and sea fans and plenty of flamingo tounges munching on them, just look at the gorgonians and sooner or later you would see one. Some hard corals, but not too many, some brains and other corals I have no idea what they were. We also saw a baby imperator angle and a while snorkeling an itty bitty little copper banded butterfly.

Visability was decent, MUCH better than atlantic diving up here, but not what I am used to in Cozumel and the Caymans, although I am certainly not complaining about it. We went out of Playa Del Carmen, not Coz. The two reefs we went on were Moc-che and Jardines. Both dives were in the 30-60ft range, although we got up to about 20 ft in some areas, couldn’t go any deeper, unless you had a shovel. Both were about 50 minute dives, although I could have stayed much longer as I still had about half my tank left.

So we only got to do 2 dives, and it wasn’t worth the hassle to bring the rebreather, although I am interested as to what more wildlife I would have seen on it.

[quote=“IanH, post:17, topic:1698”]
and plenty of flamingo tounges munching on them, just look at the gorgonians and sooner or later you would see one. [/quote]

Did we talk about them before? I have such a bad memory.

Not sure, they are basically like a snail/slug that eats gorgonians, very pretty though.

Heres a pic from the web: 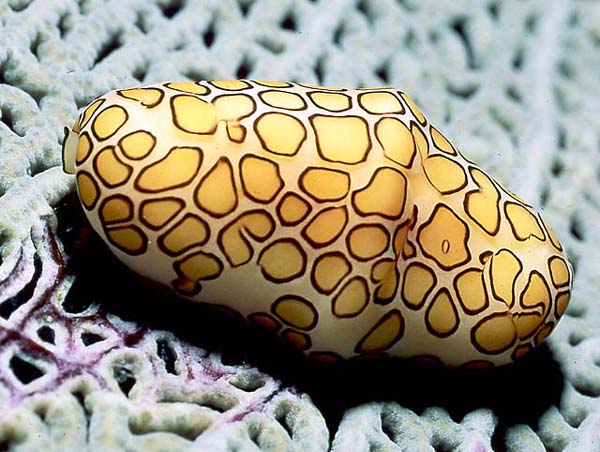 The outer shell is hard, but smooth and sometimes slimey.

Cyphoma gibbosum. I spent a month in the Caribbean studying them. I really like cowries, they are one of my favorite critters on the reefs. I have a couple currently, but of course not the Flamingo Tounges.

I was very saddened once to see a website offering these critters for sale for hobbyist. I wrote them a not so nice letter. lol